A two dimensional electronic gas (2DEG) with high mobility of carriers placed in perpendicular magnetic field exhibits the integer and fractional quantum Hall effects. The Landau quantization of electronic levels in 2D system leads to gaps in the density of states. The Fermi energy is then an oscillatory function of the magnetic field, jumping to successively lower Landau levels with the increasing Landau level degeneracy eB/h per spin sub level. The gap in the density of states at the Fermi level is responsible for the integer quantum Hall effect which was first reported in Si MOSFETS at integer filling factors hns/eB, where ns is the 2D carrier density. When electron-electron interactions are taken into account, gaps also occur in the density of states at fractional filling factors leading to the fractional quantum Hall effect, first reported in GaAs heterojunctions. The resistivity of the sample Rxx = 0 while the Hall resistivity Rxy = h/e2 is quantized, where – takes integer 1, 2, 3… or fractional 1/3, 2/3… values. Since the discovery of both the integer and fractional quantum hall effect, the quality of GaAs based samples has been continuously improving. As a consequence, it is now possible t o observe many fractional states in the 0LL as well as in the 1LL.

In 1999 we reported that the phase diagram for the (half) width of the dissipationless state, in the longitudinal resistance Rxx, versus magnetic field of a quantum Hall sample bears a remarkable resemblance to the phase diagram for the critical magnetic field of a high-temperature superconductor with vortex melting. This can be seen in Fig. 1 where we plot the Bc(T) phase diagram. All even integer filling factors show a low-temperature Gorter-Casimir-like phase with, perhaps surprisingly, the same (extrapolated) critical temperature Tc≃1.5K. In the high-temperature phase the critical temperature Tc for even filling factors scales approximately as the cyclotron gap.

We have shown that the Bc(T) phase diagram can be exactly explained by a simple model involving thermal activation from localized states in the tails, to the delocalized state near the center, of a disorder broadened Landau level at the Fermi energy (see Fig. 1). Our results strongly suggest that Landau-level broadening is Lorentzian. The long Lorentzian tails are a fundamental requirement to explain the robust high-temperature Bc(T) phase. In other words, it is essential to have a significant number of states, deep in the gap, into which the Fermi level can be pushed in order to suppress thermal activation at the high critical temperatures observed in experiment. We conclude that Gaussian broadening simply fails to meet this stringent requirement. 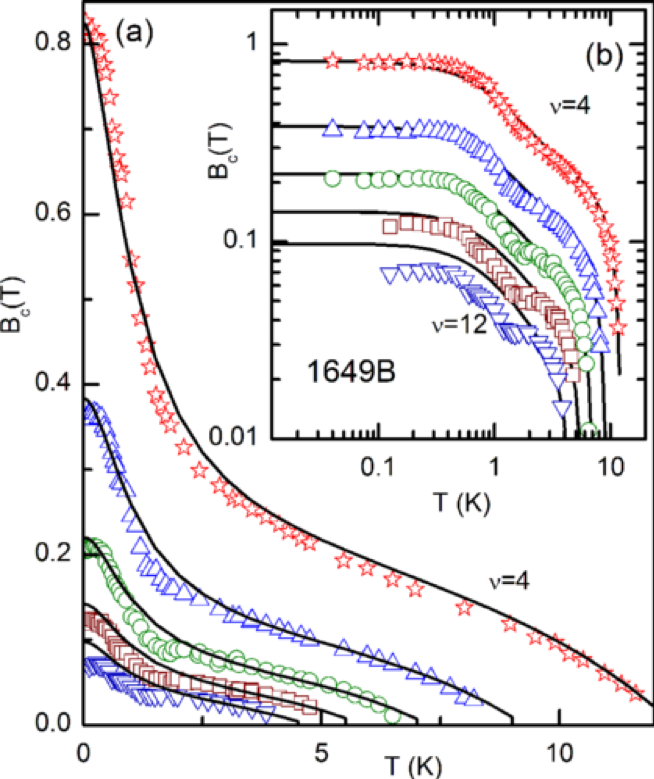 Fig. 1 (a) Critical magnetic field (half width of the dissipationless region in the longitudinal resistance Rxx) versus temperature for even integer quantum Hall filling factors ν=4-12 . The solid curves are the calculated critical magnetic field due to thermal activation of carriers to delocalized states above the mobility edge in the disorder broadened Landau level. (b) A log-log plot of the same data and calculations.