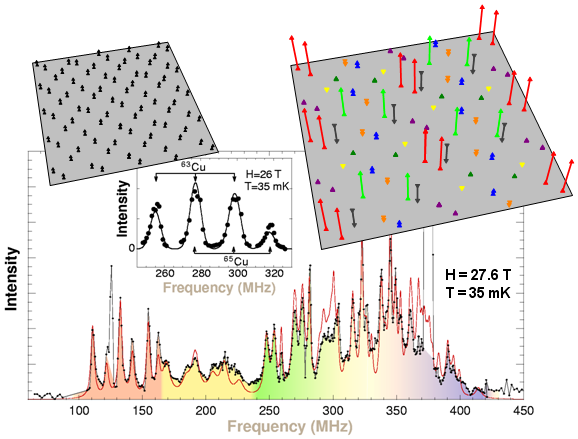 Figure: NMR spectra in SrCu2(BO3)2 compound obtained at temperature of only 0.035 kelvins in the homogeneously magnetized phase at 26 teslas (shown in black and white) and in the « magnetization plateau » at 27.6 teslas (shown in color) are spectacularly different. The latter one enabled the determination of the structure of « magnetic crystal ».

In most of magnetic solids the magnetic moments carried by the atoms order at sufficiently low temperature into a ferromagnetic (in which all moments are parallel) or antiferromagnetic (alternated moments) structure. In the latter case, the average magnetization is zero, but its local value on each atom is strong. In the last twenty years it has been discovered that in some solids, usually very anisotropic [1], the low temperature physics is dominated by quantum effects, leading to the existence of a non magnetic state (even locally), that specialists have named « spin liquid » [2]. When an external magnetic field is applied to this kind of system, the value of the magnetization at very low temperature remains equal to zero until some threshold field, above which the magnetization increases towards its saturation value. Between the threshold and the saturation value of the field, magnetic moments are not frozen on some particular atoms, but are delocalized over the whole crystal, just as electrons in a metal. As a consequence, the magnetization of all the magnetic atoms is identical. In some low dimensional compounds [1], however, it has recently been observed that the magnetization does not increase in a monotonous way with the applied magnetic field, but some « plateaus » occur at special magnetization values corresponding to simple fractions (1/8, 1/4, 1/3,…) of the saturation value. Within these « plateaus » the previously described « magnetic liquid » is expected to « freeze » into a new type of « magnetic crystal », in which the moments are localized and form a complex pattern, periodically modulated in space. Such plateaus at 1/8, 1/4, and 1/3 of the saturation value have recently been observed in SrCu2(BO3)2, a compound in which the magnetic moments are borne by copper atoms. The first plateau appears at magnetic field values close to 28 teslas, (i.e., over five hundred thousand times the value of the earth’s magnetic field). Although the most appropriate technique for the determination of magnetic structures is neutron diffraction, it cannot be used at such high fields. That is the reason why a Nuclear Magnetic Resonance (NMR) [3] experiment, performed at very high magnetic field and at very low temperature (only 0.035 degrees above absolute zero), has been used by a french-japanese team to determine for the first time the structure of this very peculiar « magnetic crystal » [4]. These results, very much awaited by the theorists in the field of quantum magnetism, have been obtained at the Grenoble High Magnetic Field Laboratory, a french-german institution managed both by the Centre National de la Recherche Scientifique (CNRS) and the Max Planck Geselleschaft (MPI-FKF). It is presently the only laboratory in the world in which NMR experiments can be performed under such extreme conditions.

[1] The magnetic ions are arranged in planes or chains within which they strongly interact. These sub-units are only weakly coupled to each other.
[2] Let us imagine that we have put a small, non-perturbing observer inside each magnetic atom: in a ferromagnet, all the observers will measure the same magnetic field, with the same amplitude and direction. In an antiferromagnet, two neighboring observers will measure magnetic fields of same amplitude, but with opposite direction, so that the sum of all measurements will vanish. In the case of a « spin liquid«  each observer will measure a zero value for the magnetic field, and this property can be explained only by quantum mechanics ! In fact, such an observer indeed exists: it is borne by the atomic nucleus, and physicists are able to collect its measurements by the NMR [3] technique.
[3] The Nuclear Magnetic Resonance or NMR technique has become popular among a wide public through its applications to medical imaging (MRI, Magnetic Resonance Imaging).
[4] K. Kodama et al., Science 298, 395 (2002), (cond-mat/0210294).