Aller au contenu principal
Low-dimensional quantum antiferromagnets in a magnetic field are remarkable model systems for studying the field induced exotic phases, e.g., Bose-Einstein condensation [T. Giamarchi, C. Rüegg, and O. Tchernyshyov, Nature Phys. 4, 198 (2008)], and the related quantum critical points (QCPs) where the continuous quantum phase transition occurs at zero temperature. In the vicinity of QCPs the physics is complex but universal, i.e., insensitive to the microscopic properties of the system, and scale invariant, with temperature setting the only energy scale.
Using nuclear magnetic resonance (NMR), we have provided the first clear experimental demonstration of the quantum-critical behaviour in magnetic insulators. By means of nuclear spin-lattice relaxation rate T1-1, we have followed the spin dynamics as a function of the applied magnetic field in two gapped quasi-one-dimensional (quasi-1D) quantum antiferromagnets : the anisotropic spin-chain system NiCl2-4SC(NH2)2 (called DTN) and the spin-ladder system (C5H12N)2CuBr4 (called BPCB). In both systems, spin excitations are confirmed to evolve from magnons in the gapped state to spinons in the gapless Tomonaga-Luttinger-liquid state. In between, T1-1 exhibits a pronounced, continuous variation, which is shown to scale in accordance with quantum criticality (see the figure). We have extracted the critical exponent for T1-1, compared it to the theory, and showed that this behaviour is identical in both studied systems, thus demonstrating the universality of quantum-critical behaviour.
Our T1-1 data and analysis correspond to a quasi-1D critical behaviour, which is not yet covered by any theory. For this regime we have extracted the experimental scaling function shown in the figure, to serve as a reference for future theoretical descriptions. The data will be further extended to a 3D region at lower temperatures in DTN, and to the true 1D region at higher temperatures in BPCB, where a comparison to the existing theories is possible. 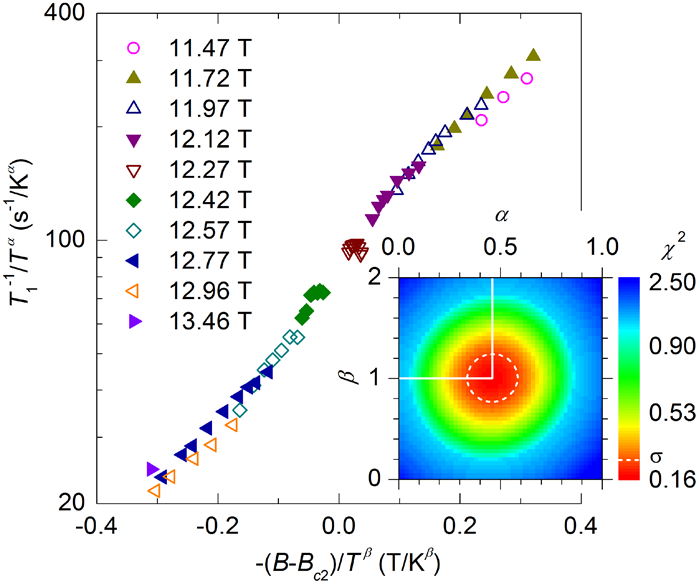