An exotic superconducting state, allowing the superconductivity to survive in exceptionally high magnetic fields, has been finally characterized at LNCMI, thanks to collaboration between Vesna Mitrovic from Brown University in Providence, LNCMI NMR team and their colleagues from the University of Tokyo. They have identified the first microscopic signature of an FFLO phase, the so-called Andreev bound states. 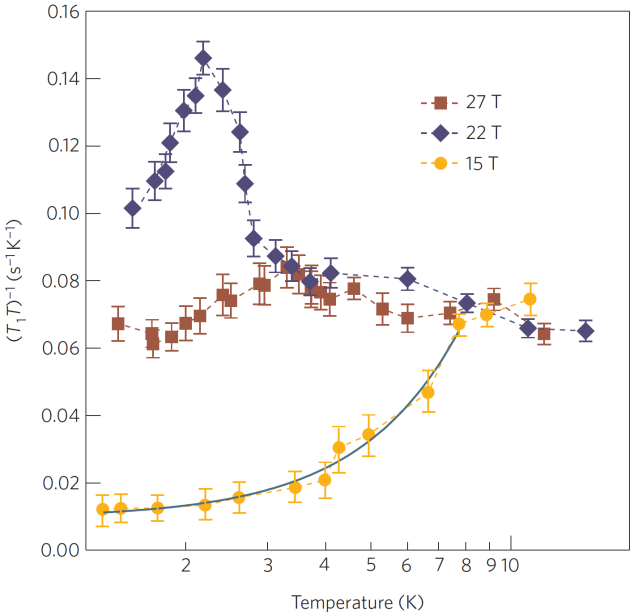 Fig. 1 The NMR relaxation rate of 13C in kappa-(BEDT-TTF)2Cu(SCN)2 at high magnetic field as a function of temperature. The peak observed at 22 T is a clear signature of the FFLO phase, as compared to behaviour in the superconducting phase at lower field (15 T) and in the normal phase at 27 T.

As the mechanism of superconductivity is based on the formation of pairs of electrons that have opposite spins and momenta, called Cooper pairs, the superconducting state can be destroyed by the application of the magnetic field strong enough to enforce parallel alignment of the two spins in a pair. Nevertheless, in 1964 the physicists P. Fulde, R. Ferrell, A. Larkin et Y. Ovchinnikov have discovered that some materials could better resist to high magnetic fields if the Cooper pairs acquire a non-zero total momentum. In this new « FFLO » phase the superconducting state becomes periodically modulated in space, wherein the spins aligned by the field form exotic quantum states, called Andreev bound states. Based on macroscopic measurements, the existence of an FFLO phase has been proposed in several materials, but without any direct microscopic signature of this state. This has been finally provided only now, 50 years after the theoretical prediction, by an NMR study of an organic superconductor kappa-(BEDT-TTF)2Cu(SCN)2 performed in the high-field magnets at LNCMI. Inside the FFLO phase a strong peak in the NMR relaxation rate has been observed (Fig. 1), whose temperature and field dependence indicate that it is induced by the Andreev bound states.
Physics of the FFLO phase may also be relevant to very different systems, in astrophysics, for our understanding of pulsars and in the description of interactions between quarks (quantum chromodynamics). As one cannot do any experiments on these systems, the first identification of the FFLO phase in an experimentally accessible material is of capital importance.