In their collaborative work, experimentalists from LNCMI Grenoble and theorists from the Laboratoire de Physique Théorique in Toulouse have demonstrated that, contrary to previous expectations, disorder can help ordering of quantum matter.
To show this, they have studied the spin-chain based material NiCl2-4SC(NH2)2, also called DTN, which at low temperature presents a magnetic-field-induced ordered phase, described as a Bose-Einstein condensate (BEC). So far it was believed that, close to this BEC phase, chemical disorder created by doping Br impurities to substitute Cl ions in DTN would lead to localization, namely the so-called Bose-Glass state. However, building on Nuclear Magnetic Resonance (NMR) experiments on doped DTN at high magnetic field, combined with state-of-the-art quantum Monte Carlo simulations, a radically different scenario was discovered. Based on a very precise microscopic image of the impurity states provided by NMR results, theoretical modelling showed that the mutual pairwise effective interaction of the impurity states leads to a global quantum coherence over the full sample, which results in a new type of BEC ordering of these impurity states, in sharp contrast with a localized Bose-Glass. The existence of this new, « order-from-disorder » phase is now definitely confirmed by NMR investigation in a strongly doped DTN sample, in which the new phase appears at experimentally accessible temperatures. The corresponding experimental phase diagram could be determined from characteristic spin fluctuations, directly measured by the nuclear spin-lattice relaxation measurements, and was found in excellent agreement with the theoretical prediction. This remarkable discovery is thus rewarding a very successful collaboration between experimental and theoretical teams. 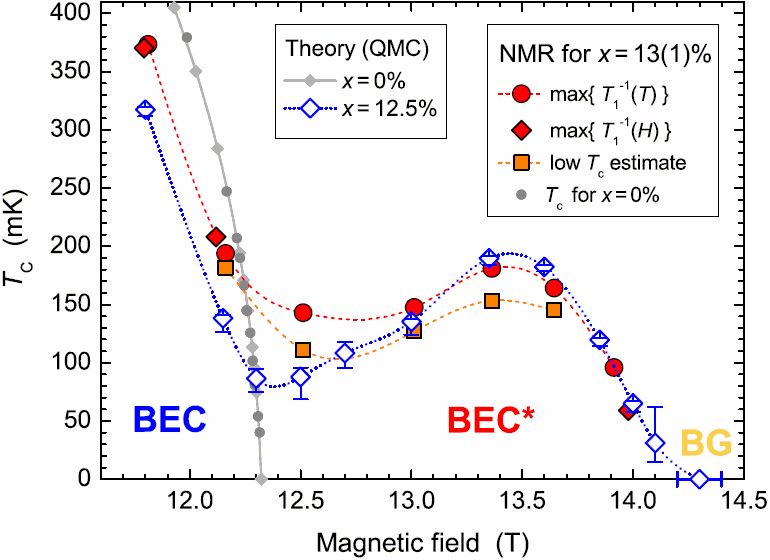