In high temperature copper-oxide superconductors, however, this may not be the whole story because the “normal” state is everything but normal. Researchers have been working at elucidating the electronic properties of this state for the last 25 years but the problem is so complex that no consensus has yet been reached. Triggered by experimental observations of ordered electronic phases in proximity to superconductivity, the concept of competing orders has emerged in the recent years. Superconductivity would be in competition with one or several electronic orders, but it could originate from quantum critical fluctuations associated with one of these orders. 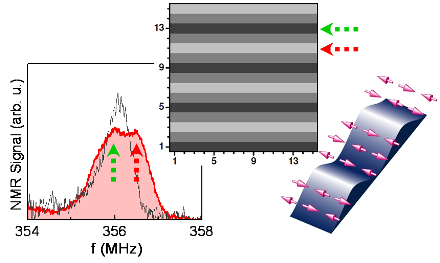 High magnetic fields are the most promising way for promoting the vortex cores at the expense of superconductivity and thus extending the temperature range over which the normal state can be probed. Ideally, when superconductivity is entirely suppressed, experiments can address the question of what ground state the system would have if it were not superconducting. Is there any leading competing order ?

Motivated by the discovery of quantum oscillations by colleagues at LNCMI Toulouse [N. Doiron-Leyraud et al., Nature 447, 565 (2007)], and in cooperation with scientists from Vancouver, researchers from LNCMI Grenoble have exposed samples of YBa2Cu3Oy to magnetic fields strong enough to significantly weaken superconductivity (up to 33.5 Tesla). Using nuclear magnetic resonance (NMR), they have discovered that a fraction of the charge density forms a spatially ordered pattern. They find that this pattern is most likely the same stripe-order (linear filaments of increased charge density) as previously observed in a family of cuprates where superconductivity is naturally weak. They conclude that charge carriers in high temperature superconductors have a natural tendency to form such stripes. Because stripe order is not observed at low magnetic fields where superconductivity is robust, there appears to be a clear competition between these two phenomena.

This discovery has been made possible by the quality (temporal stability and spatial homogeneity) of the steady magnetic field produced in the resistive magnets of LNCMI Grenoble and by the instrumentation developed in the NMR group over the last ten years. NMR experiments up to 1.5 GHz frequencies can be performed at LNCMI.