Optical MChA manifests itself in chiral systems under a magnetic field as a small difference in the absorption (Rikken and Raupach 1999), luminescence (Rikken and Raupach 1997) or refraction of unpolarized light depending on the relative orientation of the propagation direction of the light and the magnetic field direction. The manifestation of optical MChA in photochemistry has been studied at length (Rikken and Raupach 2000, Raupach et al 2000).  For a systematic experimental observation of optical MChA, a dedicated  VIS-NIR spectrometer using an alternating magnetic field and phase sensitive detection was developed which is in operation at temperatures between 2 K and 300 K (Kopnov and Rikken 2014). It has been used to study optical MChA in chiral ferrimagnets (Train et al 2008) and more recently on ferromagnetic metal-organic frameworks (Atzori et al 2019).

Electrical MChA consists of a difference in the electrical magneto-resistance of chiral systems depending on the relative orientation of current and magnetic field. A setup was develop using an alternating magnetic field and phase sensitive detection to observe this effect in helices (Rikken et al 2001), carbon nanotubes (Krstic et al 2002), molecular conductors (Pop et al 2014) and tellurium (Rikken and Avarvari 2019), in the temperature range of 2 – 300 K.

Most methods to detect the chiral NMR signature require the measurement of signals that are beyond current NMR detection limits. Therefore, strategies are necessary to enhance the chiral NMR signal. The activity at LNCMI focuses on two main challenges: (i) Find and synthesize an appropriate target molecule to demonstrate the effect, which involves quantum chemistry calculations and advanced methods of chemical synthesis (Garbacz et al. 2015). (ii) Develop and fabricate an appropriate experimental setup and method: the normal NMR signal strongly pollutes the chiral NMER signal due to fundamental electrodynamics and needs therefore to be suppressed. Currently various NMER setups are explored by computer simulations and benchmark experiments. Their common feature is that the unwanted normal NMR signal is either suppressed by geometry using resonator structures (Garbacz et al. 2016) or by the usage multiple excitation and detection circuits that allow the elimination of the unwanted signal by compensation methods. 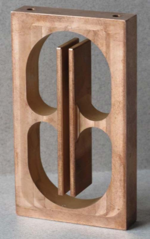