Extensive studies of cuprate superconductors have shown that, after three-dimensional Néel order disappears upon hole doping (p), there are still remnants of spin order at low temperature (T) in the form of a glass-like freezing of incommensurate antiferromagnetic correlations. However, the importance of the coexistence of incommensurate spin order with superconductivity and its connection to the enigmatic pseudogap has remained elusive so far.

In this work, researchers at the LNCMI have used local (nuclear magnetic resonance) and bulk (ultrasound) measurements to show that, once competing effects from superconductivity are removed by high magnetic fields, the spin-glass phase of La2−xSrxCuO4 survives up to a hole doping level much higher than hitherto believed: actually, up to the critical doping level p* that defines the end of the pseudogap phase at T = 0. This means that, in the non-superconducting ground state, the boundary of the pseudogap phase at T = 0 coincides with a quantum phase transition from glassy antiferromagnetic order to a correlated metal with only short-lived antiferromagnetism.

This work shows that the spin glass phase spans from the weakly doped insulator at p = 0.02 all the way up to p* ≈ 0.19. This suggests that the same local-moment antiferromagnetism as that found in the doped Mott insulator survives throughout the pseudogap state, which provides a connection between the pseudogap and the physics of the Mott insulator. 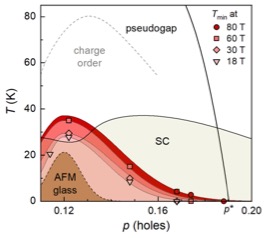 Figure. Temperature – doping phase diagram representing Tmin, the temperature of the minimum in the sound velocity, at different fields. Because superconductivity precludes the observation of Tmin in zero-field, the dashed line (brown area) represents the extrapolated Tmin(B=0), which is close to the freezing temperature Tf at the NMR and ultrasound time scale of ~10-8 s.